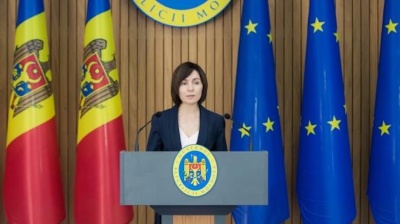 PM Maia Sandu's government relies on a fragile alliance with the pro-Russian Socialist Party.
By Iulian Ernst in Bucharest August 13, 2019

Moldova’s presidency has harshly criticised the government of Prime Minister Maia Sandu — which is backed by President Igor Dodon’s Socialist Party — for resuming agreements with the International Monetary Fund (IMF) and accepting provisions “that would impede further development of the country”.

The controversial amendments were passed by the government on August 9, but still have to be endorsed by the parliament, which will hold an extraordinary session this week. Failure to have the fiscal provisions passed smoothly would put at risk the financing expected by Moldova from the IMF, the European Union and Romania.

The Socialists’ opposition to the bill might herald the first formal conflict within their fragile alliance with the pro-EU ACUM bloc, headed by Sandu and Minister of Interior Andrei Nastase.

The unlikely partners came together to oust the Democratic Party headed by controversial oligarch Vlad Plahotnuic — with Sandu saying they will “de-oligarchise” the Moldova state — but there are substantial policy differences between them, not least over Moldova’s geo-political orientation.

The agreement with the IMF should be urgently renegotiated, Dodon said at the end of July and his advisor Ion Chicu repeated the call at the end of last week.

Among the most controversial measures included under the latest review of the agreements with the IMF, discussed at staff level between June 6 and July 10, is the hike of the VAT rate for hotels and restaurants from 10% to 20%, as well as the partial taxation of meal vouchers. Business associations in Moldova have asked the government not to levy taxes on the meal vouchers, while employers in the hospitality industry have announced a strike for this week.

The IMF said on July 10 it had reached a staff-level agreement with Moldova on the combined fourth and fifth review under its loan deal with the country that is expected to unlock the next loan tranche.

The agreement is subject to approval by the IMF’s management and the IMF executive board. Upon its completion, the country will get the next loan tranche of around $46.5mn.

“The mission reached an understanding on fiscal measures needed to correct policy slippages from the 2018 package of tax initiatives and capital and tax amnesty that undermined programme objectives and led to rising budgetary pressures. The authorities plan to approve a sound 2019 supplementary budget to mitigate fiscal vulnerabilities, while protecting priority social spending,” the IMF noted upon completion of the mission.

Soon after the staff-level agreement with the IMF, the EU announced that it will start unblocking financial aid to Moldova, with the first payment expected almost immediately.

Brussels had previously cut financial assistance and frozen some payments due to concerns about the previous government controlled by Plahotnuic, specifically concerning the rule of law and changes to the electoral system. Concerns were growing in Brussels about state capture in Moldova.